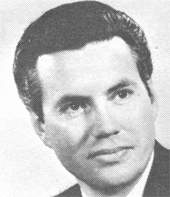 When Wayne Bristow answered God’s call to preach, he immediately had a desire to go beyond the West Texas and Eastern New Mexico horizons of his youth. He was a 16 year-old high school student stocking shelves and sacking groceries at the local supermarket. He remembers arranging cans on the shelves while day-dreaming of being in places he had only read about or seen in books, magazines or movies.

When missionaries and well-traveled evangelists visited his home church, he listened intently to their stories. He maneuvered for opportunities to speak with them personally or to be at a table where they were eating. He followed closely the expanding ministry of Dr. Billy Graham and thrilled as people around the world responded to the Gospel.

He deliberately cultivated relationships with people who were from different language and cultural backgrounds. He persisted in this even when it meant kicking against the deep-rooted prejudices of those he loved and respected. He wanted to go farther, see more and do more.

Bristow remarked about his Evangelism ministry around the world…“Dreaming about doing something is one thing. Actually doing it is something else. Only in the doing will you discover if you are really hard-wired for this. Some people dip their toes in the surf and never venture into the ocean. Others are compelled to go into the deep. A person will not know how he will respond to combat until he is in the heat of battle.”

Wayne founded Total Life International Ministries in 1993. Before beginning his work with TLM, he had served as the pastor of a local church for three years, spent 19 years in an itinerant ministry of evangelistic preaching, served for five years as an associate director of the Volunteers in Missions Department of the Foreign Mission Board of the Southern Baptist Convention (now IMB). He also served almost eight years as the director of the Evangelism Department for the Baptist General Convention of Oklahoma. In addition to his preaching and teaching ministries, Wayne is also an author. Wayne is a 1960 graduate of Wayland Baptist College in Plainview, Texas.

Wayne Bristow is a veteran of over 50 years of active evangelism ministry. During this time, he has preached and taught on five continents and throughout the United States of America. Whether teaching or preaching, Wayne blends an up-to-the-minute awareness of current events with strong Bible exposition.