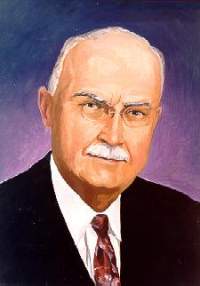 Ham was the son of Tobias and Ollie (McElroy) and was born on a farm in Allen County near Scottsville, Kentucky. He came from eight generations of Baptist preachers. In 1886 his family moved to Bowling Green staying till 1888 when they returned to a second farm near Greenwood in Warren County. His conversion and spiritual inclinations were attributed to the devotional habits of his home. He cannot date his conversion. He stated "From the time I was eight years old, I never thought of myself as anything but a Christian. At nine years old I had definite convictions that the Lord wanted me to preach.”

At his first revival, he established a pattern that was to follow him the rest of his days. He went after the biggest sinners in town and often saw them saved. He believed enough personal evangelism would produce mass results. While Ham was holding a meeting at Mount Zion, Kentucky he ran into the type of opposition that was to follow him most of his career. On the second night of the meeting the moonshine crowd surrounded the church and threw rocks at the preachers. The leader threatened Ham with a long knife. Ham said, "Put up that knife, you coward...Now I'm going to ask the Lord either to convert you and your crowd or kill you." The bully died the next morning before Ham could get to his bedside.

In 1935 Ham was honored with a D.D. degree from Bob Jones University. In 1936 he was elected President of the International Association of Christian Evangelists. His rugged pace continued until his sixty-fifth year, 1941, when he began his last year in tent and tabernacle campaigns.

Ham's career in evangelism stretched from 1902 to 1961. There were more than 33,000 conversions during the first year of his ministry. As a result of his ministry, there were more than 300,000 new converts in a period of three decades. Southern Baptist churches benefited the most. It was in November 1934 that a sixteen-year-old boy named Billy Graham went forward in the Charlotte, North Carolina Crusade to accept Christ as his personal Savior.