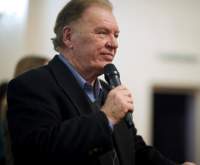 Evangelist Michael Gott takes his message of hope for people of this earth throughout the world annually. He admits having a personal agenda ‘to be a no-body, telling everybody about somebody who can change anybody!‘

Not many men are closer to world events or their meanings than Michael Gott. His constant travel around the world, conversations with the news makers themselves, and hunger to interpret the events in our world in the light of what the Bible says about the future qualify him to speak to the issues that threaten and challenge the human family.

A recent promotional piece for one of his evangelism events reads: "Michael Gott is worth a hearing! He finds the danger, the hope, and the way out that is so desperately needed today. His gift is to speak to the everyday man with work-a-day problems."

Michael Gott looks at the modern horrors that are upon us — violence, terrorism, despair, moral chaos, loss of confidence in leadership, deception, and confusion — and he, like a prophet, exposes them to the light of eternity. But he also speaks with confident hope. “We are not creatures of fate. We can do something about it before it is too late. While it is late, it’s not too late,” he said recently in a television interview.

Michael Gott is an evangelist, but more and more the comment is made, “He speaks like a modern day prophet!” His messages are practical, helpful, and insightful. His warnings are bold; his word rings with truth and grace; his avowed aim is that men, women, and young people will hear, understand, and be transformed.