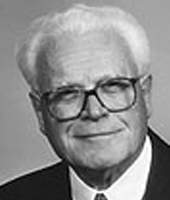 Born in Woodruff, South Carolina in 1910, J. Harold Smith grew up in the Greenville area. He graduated from Furman University with the intention of going on to medical school. He found Christ on the porch of his sister Mildred's home in 1932, and shortly thereafter surrendered to preach. In his first revival shortly after he was saved -- many were saved and the revival lasted several weeks.

Dr. Smith was a pioneer in the use of broadcast media, and started the Radio Bible Hour broadcast in 1935. He helped to develop Christian radio in the 1940s, and was one of the first ministries to be heard nationwide through the giant Mexican radio station XERF. He was the pastor of a number of churches. In 1953 as pastor of the First Baptist Church of Fort Smith, Arkansas he started the television broadcast of the morning worship services.

Dr. Smith often found himself in opposition to the liberal religious movement which has proved so destructive to many church denominations. He accepted the Bible as he found it, preached it as the truth, and lived by its principles. Although he took strong stands in the pulpit, he was known for his kindness and compassion to his congregations and he had a genuine love for the lost.

For those who knew him, he was a humble man, even when he was experiencing great success in his ministry. During his years as an evangelist, he always accepted speaking invitations on a "first-come-first-served" basis. He often spoke in small churches, because they had asked first, and never refused to go preach because his expenses might not be met. He enjoyed God's blessings, but never forgot what it was like to be poor.

Dr. Smith lived his life with integrity, joy, and with absolute confidence in Jesus Christ. He often signed Bibles for his listeners with the words, "Jesus Never Fails." By the time of his death he had nearly memorized much of the Bible. He worked in the office of the Radio Bible Hour until about five weeks before his death in 2001. At that time, he was 91 years of age.