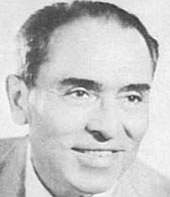 Hyman Jedidiah Appelman was born on the banks of the Dnieper River in White Russia of Orthodox Jewish parents. Hyman arrived in America with his mother and three younger brothers in December 1914. Hyman knew Hebrew, and had a fair command of German, Russian, Yiddish and Polish. He enrolled in the public school in Chicago. Despite the handicap of learning a new language he went through the first eight grades in two years.

Eventually he enrolled at Northwestern University and DePaul University attending both schools from 1918-1921. He graduated and received his license to practice law in 1921 and was a successful trial lawyer in Chicago. In December 1924 he visited Kansas City. He checked into the YMCA and in his room found and read a Gideon Bible. That was the beginning of his conversion and call to ministry.

His conversion naturally had created a stir in Jewish circles and he became an outcast from his family. Because his family shunned him, he wanted to learn more about the Bible before going back to his kinfolk for a confrontation. He found odd jobs to support himself. In addition, he began to give his testimony and preach. The first Sunday in August he preached the morning and evening messages in the church where he was converted while the pastor was on vacation. That night he received a telegram from home saying his mother was dying. He took the first train home. When he arrived he learned that his father had faked the message to get Hyman home to plead with him to reconsider his ways. When Appelman refused, the father with indignation and wrath said, "When your sides come together from hunger and you come crawling to my door, I will throw you a crust of bread as I would any other dog."

Feeling a definite call to the ministry he went to Southwestern Baptist Theological Seminary where he received his theological training. In December 1933 he was elected to be one of the state evangelists for Texas. He held that position until January of 1942. He felt the call of God for a larger ministry and launched into single church meetings and city and county-wide crusades across the country. During his life Appelman's average year would see some 7,000 first-time professions of faith.

Dr. Billy Graham wrote… "Dr. Appelman is one of the greatest and most powerful preachers of the Gospel I have ever listened to. I used to listen to him preach night after night and made notes on his sermons. Some of my own knowledge and inspiration concerning mass evangelism came from his ministry. Thousands of names are written in the Lamb's Book of Life because Dr. Appelman passed their way”.