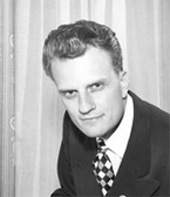 Born November 7, 1918, William F. Graham was reared on a dairy farm in Charlotte, North Carolina. Growing up during the Depression, he learned the value of hard work on the family farm, but he also found time to spend many hours in the hayloft reading books on a wide variety of subjects. In the fall of 1934, at age 15, Graham made a personal commitment to Christ through the ministry of Mordecai Ham, a traveling evangelist, who visited Charlotte for a series of revival meetings.

Ordained in 1939, Graham received a solid foundation in the Scriptures at Florida Bible Institute. In 1943 he graduated from Wheaton College in Illinois and married fellow student Ruth McCue Bell. Ruth was the daughter of a missionary surgeon, who spent the first seventeen years of her life in China. After graduation, Mr. Graham pastored the First Baptist Church in Western Springs, Illinois before joining Youth for Christ. An organization founded for ministry to youth and servicemen during World War II. He preached throughout the United States and in Europe in the immediate post-war era emerging as a rising young evangelist.

The Los Angeles Crusade in 1949 launched Mr. Graham into international prominence. Scheduled for three weeks, the meetings were extended to more than eight weeks, with overflow crowds filling a tent erected downtown each night. Many of his subsequent early Crusades were similarly extended, including one in London which lasted 12 weeks, and a New York City Crusade in Madison Square Garden in 1957 which ran nightly for 16 weeks.
He has preached in remote African villages and in the heart of New York City. Those to whom he has ministered have ranged from heads of state to the simple-living bushmen of Australia to the wandering tribes of Africa and the Middle East.

Mr. Graham founded Billy Graham Evangelistic Association (BGEA) in 1950, headquartered in Minneapolis, Minnesota until relocating to Charlotte, North Carolina in 2003. He conducts his ministry through BGEA. This ministry includes the weekly “Hour of Decision” radio program broadcast around the world on Sundays for more than 60 years. The ministry also includes a syndicated newspaper column, “My Answer,” carried by newspapers nationally and internationally and “Decision” magazine, the official publication of BGEA, which has a circulation of more than 400,000, making it one of the world’s most widely circulated religious periodicals.

Mr. Graham’s counsel has been sought by presidents, and his appeal in both the secular and religious arenas is evidenced by the wide range of groups that have honored him, including numerous honorary doctorates from many institutions in the United States and abroad. He has preached the Gospel to more people in live audiences than anyone else in history --nearly 215 million people in more than 185 countries and territories.