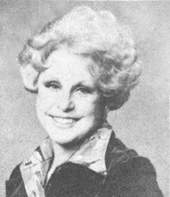 Dr. Stalnecker grew up in Ripley, Tennessee and after high school attended Louisiana State University where she received her Bachelor and Master of Music degrees. In 1998 she was chosen as Alumna of the Year at L.S.U. She was honored as a performer and presented the only Christian concert at the Music Theater at L.S.U. She earned her doctorate in ministry from Luther Rice Seminary of Jacksonville, Florida.

Bette has recorded 33 albums, numerous tapes, four CDs and has written three books. She has hosted three television programs of her own in Memphis, Jacksonville, and Ripley. She was on the Memphis Union Mission program, "Above the Clouds" for many years. Bette has been a voice teacher and soloist for the "Love Worth Finding" television ministry. Bette has done mission trips to Costa Rica, Brazil, Argentina and Romania - singing in their languages.

Bette has served the Lord for 60 years and counts THE PASCHAL HOUSE as one of her most delightful ministries. The Paschal House was built in 1966 by Laura and Farmer Paschal (Bette’s Mom and Dad). Bette inherited the home in 1991. "Paschal" means "Passover" and so Bette chose to call the home "The Paschal House" based on the scripture, "When I see the blood, I will pass over you" (Exodus 12:13) She developed The Paschal House over time as a place of ministry for groups to come for reservation meals, music and a Christian testimony.

Bette and family were in evangelism for twenty years and she has served in the local church in some capacity musically since she was twelve. She serves in conferences, revivals, concerts and retreats. Of all the things that can be said... the most important is that she loves the Lord and has dedicated her life to service for Him.