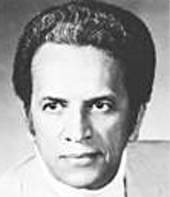 Martinez was converted in a Baptist mission in San Antonio in July 1935 at the age of 13 and preached his first sermon in September of the same year. At the conclusion of that message, every member of his family except his father was converted to Christ.

There was little if any doubt that God had called and gifted Angel Martinez as an evangelist. He saw the wisdom of preparing to be an evangelist by receiving a solid education. He graduated from Baylor University in 1945 and Southern Baptist Theological Seminary in 1949. He conducted 51 revival meetings as a seminary student.

His reputation spread beyond the seminary campus in Louisville, Kentucky. In those years, a committee from Los Angeles contacted him about a city-wide crusade. Martinez politely thanked them, but refused, saying God had called him as a local-church evangelist, not as a crusade evangelist. The committee then went to their second choice, Billy Graham. The rest is history. It is a mark of greatness and security in the Lord when one can say to a great opportunity, "That is not what God has called me to do."

One of Martinez's trademarks was his colorful dress. His advice to young evangelists… "Always look sharp, young man. Always look sharp!" He also admonished them to "Prepare one new sermon each week, whether you preach it or not. The evangelist must stay homiletically fresh."

He always ended his message by giving the same invitation, almost word for word. "No matter what I preach, I always tell people how to be saved." He always shared the Gospel. When he led inquirers in the "sinner's prayer," he would say, "If you prayed that little prayer with me, I will see you in heaven." Conservative estimates are that Martinez will see more than 500,000 who prayed that little prayer with him somewhere in a revival meeting mostly in a Southern Baptist church and many in Texas.